Find out, who is behind the Events and initiatives of the IPDR 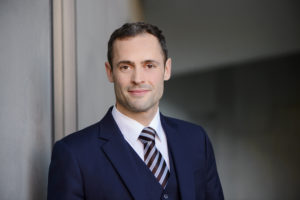 Prof. Dr. Peter Picht studied law in Munich, did his PhD at Munich University/the Max Planck Institute, and holds a LL.M. degree from Yale Law School. He has been working, i.a., in the EU Commission’s DG for Competition and as a Senior Research Fellow with the Max Planck Institute for Innovation and Competition. Prof. Picht now holds a chair for Commercial Law at the University of Zurich and is head of the University’s Centre for Intellectual Property and Competition Law (CIPCO). He remains affiliated to the Max Planck Institute as a Research Fellow and is an Of Counsel with the law firm Schellenberg Wittmer. Prof. Picht’s academic teaching and writing, as well as his counseling activity, focus on intellectual property law, competition law, international private and procedural law.

Claudia Feller is an attorney at law at Peterreins Schley Patent- und Rechtsanwälte. After completing her legal clerkship at the Higher Regional Court of Munich and the German Embassy in Madrid, she worked for several years as Academic Associate at the Chair for Business Law and Intellectual Property at the Technical University of Munich and as attorney at two international law firms. She obtained a doctoral degree on the topic of FRAND-Declarations with a scholarship of the Max Planck Institute for Innovation and Competition. Claudia also holds a master´s degree in European and International Business Law (LL.M.eur.) from the Ludwig-Maximilians-University, Munich and a master´s degree in Intellectual Property Law and Policy (LL.M.) from the University of Washington, Seattle.

Dan Bauer is award winning management consultant for law firms as well as established companies. He is managing director of the european fee council, executive manager of WINGO Consulting GmbH and Senator of economy. Alongside his responsibilities he teaches business administration at Universities, business schools and federal associations. Further Dan was Head of Business Immigration and firm manager for a business law firm.

Raffael Probst is a commercial mediator and strategy consultant in Berlin and Frankfurt am Main. Previously, he worked for the Federal Ministry for Food and Agriculture and acted as managing director of the Munich Center for Dispute Resolution (MuCDR). Raffael teaches negotiation and mediation at the LMU Munich and the Leibniz Universität Hannover. He was awarded for an entrepreneurial project by the Federal Ministry for Economic Affairs and Energy. His legal education includes stays in Munich, Athens and New York.

Peter R. Slowinski is a research fellow at the Max Planck Institute for Innovation and Competition in Munich as well as an attorney at law and certified mediator in Germany. Before joining the Max Planck Institute he has been working as an attorney in the Munich office of a US law firm with a focus on patent litigation and technology focused transactions. He represented clients in the major German district courts and appellate courts as well as the Federal Patents Court und the Federal Supreme Court in nullity proceedings. Peter obtained his legal education at the Universities of Passau and Munich in Germany, Cardiff in Wales and the Stanford Law School in the USA. At Stanford he conducted a large scale study on patent mediation in Germany and obtained a Master of the Science of Law (J.S.M.) as part of the Stanford Program in International Legal Studies (SPILS).

Klaus obtained his physics degree in 1997, became an attorney in 2002, and advises on patent infringement litigation cases, subsequent litigation regarding damages as well as licenses in the entire area of intellectual property law, particularly in the fields of patents. His particular focus is on electronics, semiconductors, software, standards, optics, electrics and general mechanics.He studied in Würzburg and Munich. He completed his degree thesis in 1997 as a member of the Spin Muon Collaboration at the European Center for Particle Physics, CERN, in Geneva, Switzerland. Parallel to his studies, he started in 1990 to specialize in intellectual property law and, in particular, in patent law. Klaus is Past President and member of the advisory board of the European Patent Lawyers Association (EPLAW) as well as board member and Past-Secretary of the Licensing Executives Society (LES) Germany.

Anna-Lena Klein has been a judge at the Regional Court Munich I since December 2014. For 2,5 years, she was a member of the 7th (patent) division and Deputy Press Officer. Since the beginning of 2020, she also acted as conciliaton judge (Güterichterin) in several IP cases. She started her career as a judge in Weilheim in 2009, prior to serving as a public prosecutor in Munich. From 2011 to 2014, she was seconded to the Bavarian State Chancellery. During her secondment, she was inter alia occupied with European IP law and the UPC. Anna-Lena Klein obtained her legal education in Würzburg and Munich and spent several months in New York and Hong Kong.

Chairman of the Advisory Board

Dr. Matthias Zigann is Presiding Judge at the Regional Court Munich I. He has been the head of the 7th (patent) division since December 2012.  After a three-year fellowship at the Max-Planck-Institute for Innovation and Competition in Munich he served as a public prosecutor in Landshut for four years and as a regular member of the 7th division of the Munich Regional Court I for six years. Prior to his appointment as presiding judge he was seconded to serve as a research associate with the Xth civil (patent) division of the German Federal Court of Justice in Karlsruhe for three years.  He is co-author of Haedicke/Timmann, Handbuch des Patentrechts, 1st ed. 2012, and Cepl/Voß, Prozesskommentar zum Gewerblichen Rechtsschutz, 2nd ed. 2018. Dr. Zigann is a frequent speaker at national and international conferences.

Dr. Stephan Gruber is active in trademark and competition law, both forensic and consulting. He specializes in patent and utility model law. He regularly handles patent infringement and nullity proceedings in all technical areas, with a focus on electronics and electrical engineering, mechanical engineering, chemistry and medical technology. In addition to his many years of experience as a litigator in patent and trademark law. Dr. Stephan Gruber regularly publishes in specialist publications. He is the publisher and co-author of a textbook on European and international patent law which has now been published in its seventh edition. In the commentary on trademark law „v. Schultz“, he comments on the law on company trademarks. Stephan Gruber teaches and lectures on national and international patent and trademark law.

Dr. Tilman Niedermaier is a partner in the dispute resolution department of CMS Hasche Sigle in Munich. His practice focuses on complex trans-border disputes. He regularly advises and represents clients on matters related to distribution and procurement issues, acquisitions, joint ventures and large-scale projects. As counsel and arbitrator, Dr. Niedermaier has acted under various institutional and ad hoc arbitration rules.

Dr. Gisbert Hohagen is an attorney-at-law and partner at the law firm Taylor Wessing. He specialises in national and cross-border patent litigation, particularly in the technical fields of pharmaceuticals, medical devices, chemistry and mechanical engineering, and advises national and international companies on patent strategies, infringement analyses, licensing as well as R&D agreements and employees’ inventions. In view of the upcoming Unified Patent Court system, Gisbert Hohagen also advises clients on legal enforcement issues and applicable IP-strategies and is invited as speaker on this topic at national and international seminars and conferences. Gisbert Hohagen studied law in Munich and at the Université Panthéon-Assas in Paris where he earned the Diplôme de Licence en Droit. Between 1998 and 2003 Gisbert Hohagen worked as a research fellow and head of department at the Max Planck Institute for Intellectual Property, Competition and Tax Law in Munich.

NOT A member yet? join us now!

Join the IPDR Forum and participate in exclusive workshops in the field of IP ADR. Individuals as well as corporate bodies, associations, and other entities can apply for membership.